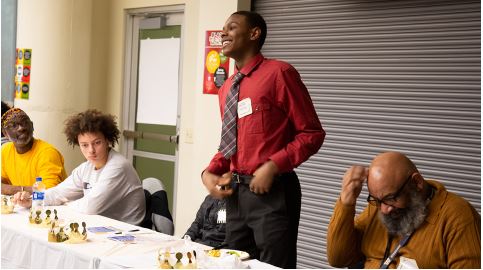 Community Collaboration With The Alliance

The Alliance for Education works in partnership with Seattle Public Schools and Seattle’s philanthropic community to identify strategies and innovations that would benefit from philanthropic support, and to raise dollars to that end. Beginning in June 2019, the Alliance led the creation of a $2.3M fund in support of SPS’ Office of African American Male Achievement. Alliance staff continue to work in partnership with our philanthropic partners to identify additional resources with the goal of raising a minimum of $3M in support of this important work.

The Office of African American Male Achievement (AAMA) is a driver of systemic change, not a program. By listening to the experiences and solutions of students and inviting engagement from families and the greater community, AAMA works to dismantle the systemic racism embedded in the public education system. Learn more here

AAMA works to ensure that the educational environment across the system supports the brilliance and excellence of Black boys and teens.

In alignment with Seattle Excellence, the district’s strategic plan and collective commitment to unapologetically support and serve students and families furthest from educational justice, AAMA is committed to the long journey required for the positive transformation of SPS and has been working to achieve that vision every day since its founding in 2019.

Seattle Public Schools is the first district in Washington state, and one of the few across the nation, to create an office that intentionally cultivates the cultural and academic strengths of African American male students while simultaneously addressing their needs.

Why begin with African American boys and young men?

In 2019, after deeply examining the district’s longitudinal data across multiple measures (i.e. academic, discipline, attendance), it was clear that past initiatives had done very little to transform the experiences, access, or educational attainment of African American male students. District data confirms that African American boys and young men are the furthest away from educational justice. Regardless of the reform or learning theory or even school site, in general, the educational needs of Black children are not being met in Seattle Public Schools. Read more here

Kingmakers of Seattle is an elective program for Black male middle school and high school students, referred to as Kings, taught by Black male facilitators. Kingmakers supports the cultural, historical, social, and emotional needs of young Black boys and teens as it relates to their identity. The program is offered at four SPS schools: Aki Kurose, Asa Mercer, and Denny International Middle Schools and Interagency Academy.

Seattle Public Schools and the City of Seattle’s Department of Education and Early Learning (DEEL) launched Kingmakers in 2017 to engage, empower, and encourage young Kings in a brotherhood-centered program.

“Black families have been marginalized so much in public education, of course they want to see fixes for each individual child. But the role of AAMA is to push the entire system and address adult practices and our policies that have been a barrier to meeting the needs of all of our African American boys and teens,” Williams says. “By focusing our work on the system, the individual needs of students will be met.”